'Reaching the Unreachable' - Reports from the Floods in Mozambique - Manna
574
post-template-default,single,single-post,postid-574,single-format-standard,et_monarch,et_bloom,ajax_fade,page_not_loaded,,qode-title-hidden,qode-child-theme-ver-1.0.0,qode-theme-ver-16.7,qode-theme-bridge,wpb-js-composer js-comp-ver-5.6,vc_responsive

04 Jun ‘Reaching the Unreachable’ – Reports from the Floods in Mozambique

Posted at 12:44h in News by elizabeth

Many of you, will have heard of and maybe supported MANNA’s grant towards the horrendous floods in January 2015. MANNA joined forces with ALMA and other mission and development agencies working with the Diocese of Niassa Mission department to support their large appeal. Tens of thousands were made homeless in these floods and lost all their livelihoods.

A few months on, it has been incredible, to hear the amazing stories of how the emergency committees were formed in these remote areas and with the ‘Equipas de Vida’ and now we learn that 9,500 were helped. Many of these were in very remote areas.

The Chire communities were a no-go zone and the only means to get there was by helicopter which was also restricted. The hospital was closed and all the nurses had to be lifted to Morrumbala. The Diocese of Niassa team in collaboration with World Vision decided to take the risk so as to try and assist the households that had no help and were cut off. They had to redevise means of reaching the unreachable communities with hired motorbikes and canoes and crossing three rivers by foot.

This work was done in collaboration and coordination with other agencies, government departments and community authorities. Such a great lesson for so many other organisations that ‘its so much better doing things together’. The people who were supported received maize for food, soap, mosquito net, water purifying treatment aswell as seeds and farm implements to restore destroyed fields. 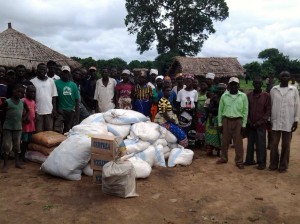 This lady from Insaca who received a mosquito net and was well aware of the dangers of malaria said: “I was really suffering because of the mosquitoes. I barely slept at all because I was spending all night trying to keep the mosquitoes away so that my children could sleep well. With this net, I know that I and my children will sleep well and I am very grateful.”

Finally the grateful words of a lady from Mecanhelas disctrict: after organising her 4 kg of cassava stalks on her head, she said that she never imagined that a smile would return to her face, but thanks to theAnglican Church and this work of mercy, she was smiling again.